Under the cut, the final list of all I read in 2011. It was my year of intense, nearly obsessive reading, my year of literary Ireland and the literary American South. High points: deep dives into Faulkner, Welty, Nabokov, the various Irish writers especially John McGahern and Eugene McCabe, and a reread of The Chateau by William Maxwell.

A few real gems: Denis Johnson's Train Dreams: A Novella; The Springs of Affection by Maeve Brennan; One DOA, One On The Way by Mary Robison.

This year I finally read The Ambassadors by Henry James in its entirety, after a history of false starts over the years, and best of all, read a good deal of it, which is set in Paris, IN Paris.


Only Yesterday: An Informal History of the 1920s Frederick Lewis Allen
Home From the Hill William Humphrey
The Damnation of Theron Ware Harold Frederic
The News from Paraguay Lily Tuck
The Power of the Dog Thomas Savage
Be Near Me Andrew O’Hagan
The Cut George Pelecanos
I Married You For Happiness Lily Tuck

I've been reading more than anything else except sleeping, I guess.
76 books read so far this year.

The routine use of "home" when what's really meant is "house" drives me nuts too. Multiple times a day. It's a kind of verbal kitsch, this calling of, say, new, never occupied houses "homes". It's not a home until it's someone's home. Prior to that, it's a house. As an object in space, as a thing destroyed by a tornado, it's a house, even if it's a home also. Yeah, it's subtle, but what I love about English is it's scope for subtlety, and what I rue about it is how easy it is to muck up the vernacular with schmaltzy over-sentimentalized usages. Before you hit the link, hit this one.

Spent the day reading The Last of the Duchess by Caroline Blackwood, a very curious little biographical portrait of both Wallis Simpson and the headstrong female French lawyer who came to control her life and finances during her last decade, and who kept the ailing duchess in strict seclusion. My copy came from the library; some previous borrower, an angry Tory clearly obsessed with the Duke and Duchess of Windsor and furious with both the lawyer, Maitre Blum, and the author Blackwood herself, has liberally festooned the book with marginal comments written in heavy pencil script (s/he was really bearing down!). Some of these comments are -- unintentionally, I'm sure -- hilarious, and made the book even more fun to read. A sample: Feminists HATE good manners--feminist c--ts hate feminINE women who know how to use men and are glad to have privilege & would never stoop to 'equality'.

Blackwood is a wonderful writer -- a couple months ago I loved her short autobiographical novel Great Granny Webster -- and she manages to be both scathing about the two women she describes so vividly and, at the end, to still succeed in presenting Wallis Windsor as a figure of credible pathos, which, frankly, takes some doing.

I have one more full day in Rome, and I can safely say I'm ready to come home. In fact I'm not entirely sure what I'll do tomorrow. I've sort of had it with wandering around. I'm tired! And the downside of being in a foreign city and dwelling in hotel rooms is now looming larger relative to the pleasure of seeing so much art and beauty.

( Collapse )
Alas my attempts to take a picture of it didn't come out well, and my hopes of finding a postcard in the giftshop were foiled when I exited the museum straight into the basilica and therefore couldn't double back to the museum giftshop. (The souvenir stands outside the Basilica only had postcards of the pope.) So I have no postcards from the Vatican Museum at all. Once you've exited, you can't go back in unless you pay again -- though I might have been able to get to the museum bookshop near the entrance for free, but that would've involved a huge hike around the periphery of the Vatican walls to get to the entry again, and ... yeah, no way. The place is just too damn big.

After my streetcar adventure into outer Rome, I went back to look at the St Theresa statue again, and then wandered around a bit wishing I could just sink into an armchair somewhere and be plied with cocktails. I find the restaurants in Italy sort of intimidating, and though I passed a couple of places where I could've sat at a sidewalk table and had some wine, I just somehow couldn't. Now I'm back in the hotel room, but will go out again around 7:30 and find some dinner. After that awful lunch I want something nice.

The weather gods took pity on me after yesterday's utter drenching, and gave me mixed clouds and sun but no rain for my valedictory look at Siena. An utterly charming town to which I hope to return.

This morning I got up before 7, got breakfast in the hotel, then went out to see as much as I could. Of course nothing was open yet at 7:40, but I wandered around and finally went to the Civic Museum on the Piazza Il Campo which has marvelous frescoes, and back to the Duomo for another look there, and I stopped in at a very intriguing food shop for a piece of cheese to eat with some apples on the train, and also succumbed to one of these muffins, which is called a Mushroom, and which contains sausage and cheese. I've never seen anything like it. I'll report back later about how it tastes. 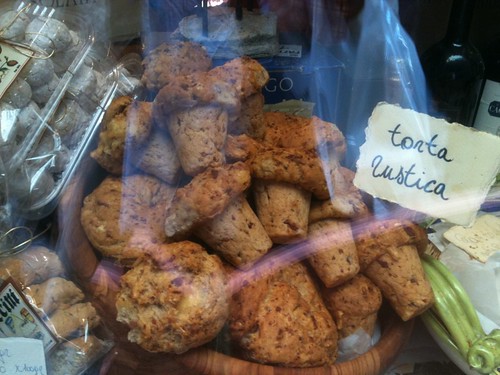 The hotel people kindly gave me a late check out, so I'm resting my tired tootsies in the room before I finish zipping up my cases and gird myself for that marathon of stairs at the train station. 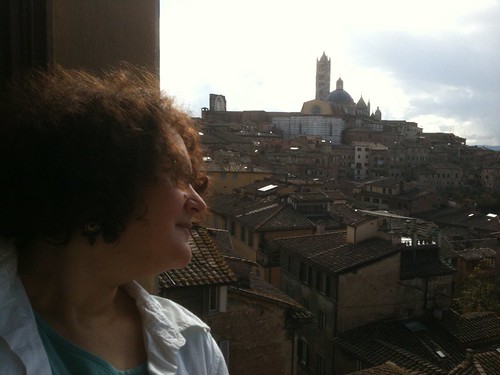 The rest of the Siena pictures are here. I'll title and tag them later.

... so as I mentioned, it's raining in Siena. Nonstop, all day. Still raining now. I'm going to keep this post short because I'm tired and I want to get up early and see more of the town before I have to leave on an afternoon train.

The trip here by train from Florence was only 1.5 hours. The train station was annoying -- like pretty much the rest of Italy, it's not set up the handicapped or people with heavy luggage -- there was an elevator which was out of order so I had to haul my 60ish lb bag up and down a flight of stairs to exit. (The desk clerk at my hotel tells me this elevator has been broken for at least the last six months. I guess no one in a wheelchair ever comes to Siena. Actually, the trains aren't handicapped accessible either, so I guess it doesn't matter if the stations are. To board a train you have to climb three steep steps.) Also annoying was the lack of signs indicating where to pick up a taxi.

So now I've complained about all that, I'll tell you that Siena has the most beautiful cathedral I've ever seen or am likely to see. And the town itself is straight out of a fairy tale. It's entirely medieval, pretty much frozen, architecturally, in the 14th century. The main piazza is stupendous and when you're there you realize that every place should have a piazza like it. No other place does.

My travel agent booked me into a very swanky hotel -- they claim they're the only 5-star hotel in Siena. Which is fine, but meanwhile the complimentary fruit platter they put in my room, which I really didn't want, contained a nectarine that when I picked it up proved to have a big ugly rotten moldy gash on it, so, uh, no thank you.

The room reminds me of my old apartment on Morton Street, where the ceilings were higher than the width of the rooms themselves. But it's very nice, and the view! This is the Italian window view people dream of. 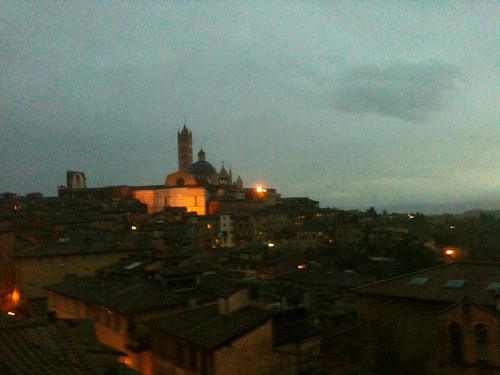 Here's a link to the other pics I took today, inside the duomo and out.